Anniversaries and other milestones

First,  a Happy picture.   These are the flowers John  had delivered to me on Monday, which was our 13th anniversary...despite me saying 14 on FB.. I was counting our year engagement since the only thing that STOPPED us from being married sooner was the fact that.well.. umm.. he was still married to  somebody else.  Long story, won't bore you with details.   It is very frustrating to be told that  a delivery IS coming on such a such a date( as opposed to  waiting for say Brown to show with a box of stuff you ordered and 'think' may be coming.   but yes I waited all day.. LITERALLY all day.   they were not delivered until 4:45 pm.    The basket was supposed to have chrysanthemums.   unless I forget what they look like, I don't see any, do you?  I know I know every florist reserves the right to substitute if the desired flower isn't fresh or whatever...  Luckily my neighbor across the street kept me company while I fretted the afternoon away.  Alas her daughter left Scouting so where am I gonna get my Thin Mints from now?!  Arrggghhh. 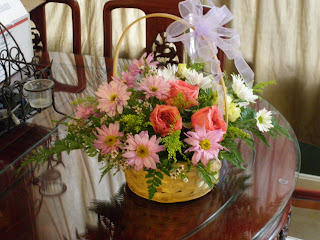 This, is Keke.   Her name comes from the fact that A's youngest N couldn't actually say Kitty.   Unfortunately this was taken just before the vet stopped by to put her out of her misery.   I only wish I had taken more pictures of her in her short few months with me.   This was her favorite spot in the house, on the spare bed close to the window and where she spent her last moments.   Luckily you cannot really tell how emaciated she was at the end.   Still cannot go in that room.....butI need to get over that.   The luggage is in that closet and I have a plane to catch at the end of November. 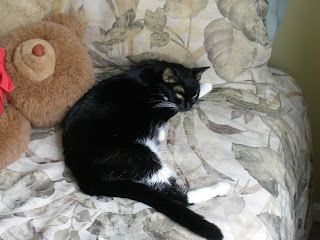 MAJOR shout out/words of praise for the Calvert Veterinary Clinic in Pasadena.  the night she was brought in for her tests we were there a good 2 hours past closing and they did nothing but reassure me they would NOT skimp on her care or force us out even when they suggested additional testing  past closing that was going to  take a good 30 minutes.   and when they called the next morning to confirm the diagnosis,  the first thing the  Doctor did was OFFER to come to my house to perform the euthanasia.   this, from  a man I had NEVER met and had never seen any of my cats, professionally or otherwise.    So Monday last, about 2ish he and one of the techs came by.   we had a long chat about what was going to happen, and then they let me say good bye alone.  all through it, she never stopped purring.   they prepped her and gave me one last hug/kiss before injecting the pink stuff.   10 seconds later, it was over.  Again, they let me sit with her a while before taking her away

The Rainbow Bridge has another Traveler.
Posted by Dawnmarie at Wednesday, September 21, 2011 1 comment:

For my generation,  September 11th has the same  meaning as December 7th did to our Grandparents.  a Day of Infamy.  one of those dates that 30 years from now you will still recall with prefect clarity  where you were and what you were doing when you first heard the news.  History books will devote entire chapters to this day and all that happened.

for some, the loss is deeply personal.  For others, a general feeling of sorrow and pain.   it was one time where the entre planet was united in grief as it wasn't just American lives lost.  and then, we got angry.   a Righteous indignation that someone DARED to  commit such a heinous act on OUR land.. in OUR back yard.  it was unheard of, intolerable, and by golly we were not gonna stand for it.

The entire Nation rallied.  Military enlistments soared to unprecedented numbers rivaling those of WW2 in the days following the attack on Pearl Harbor.  Patriotic songs by the dozens were written and sung  by musicians everywhere across all genres.  Congress passed the Patriot Act (hell that was probably the last time both sides have agreed on anything since) .  Promises were made regarding Payback

Here we are ten years later.    Lots of headlines are asking: Are We Safer?

who knows.   Osama bin Laden, the mastermind,  has met his Maker and is facing whatever judgement awaits him.    Saddam Hussein was tried, convicted, and hung by a jury of his own people The Taliban has lost most of its vast control network and has been reduced to a shell of its former  power base.  Fre elections have taken place and both Iraq and Afghanistan are recovering from the horrors of war..  The military, once begging for people , is now turning away new  recruits left and right and basically kicking  many already in out.

things ave changed, certainly.   anyone who has flown commercially in the last ten years knows that intimately.   it is our new reality.

and yet, on this day, I can't seem to give a damn about any of it.   there are tragedies, and there are tragedies.  and right now my personal one   is more important to me.  I really could care less about  all the tributes and photo montages and  moments of silence.

Tomorrow, I have to  euthanize  one of my cats.   I have only had KeKe a few months, but that doesn't matter,  she became my Cuddle Monster  the first day.  she has been a member of my family  and I love her.  I will cry buckets  when she is gone and I am not ashamed to admit it

so you will forgive me if my facebook status doesn't  list one of the ten billion different versions of "Never Forget".   You will understand if I am not glued to CNN all day reliving the fall of Tower 2 or the dedication of a memorial in a Pennsylvania field.

some things.. are more important.
Posted by Dawnmarie at Sunday, September 11, 2011 1 comment: